Manson scored his most memorable vocation season finisher objective 8:02 into extra time, Darcy Kuemper made 23 recoveries in his re-visitation of the net from an eye injury, and the Colorado Avalanche beat the St. Louis Blues 3-2 on Tuesday night in Game 1 of their second-round series.

“I was simply watching out in light of the fact that there’s a lot of folks coming at me with a ton of speed,” Manson said of the gathering embrace. “It feels significantly better to get that (win) with your group.”

The play was set up by commander Gabriel Landeskog, who was down low and doled the puck out to Manson. From that point, the defenseman sent a liner through an ocean of players that went indirectly over the shoulder of Jordan Binnington.

“We were a real resilient group,” said Landeskog, who had two assists. “We just stressed just keep playing, just keep playing, keep doing what we were doing, creating a lot and it’s just a matter of time. We were able to hem them in and (Manson) put it top shelf.” 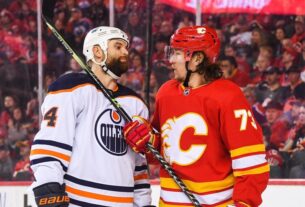