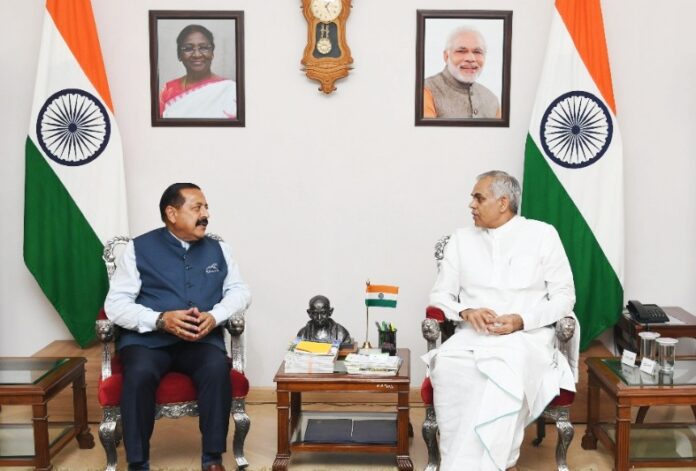 Dr Jitendra Singh said, Acharya Devvrat, besides being Governor of an important State can be appropriately described as an Agritech StartUp, who has developed innovative methodologies in natural farming which are quite different from organic farming and at the same time, much more lucrative compared to several other avenues of livelihood.

Acharya Devvrat, who is a great votary of natural farming as a way to avoid the ill effects of chemicals used in conventional farming, informed Dr Jitendra Singh that only last week, he launched a PhD programme in Natural Agriculture at Gujarat University at the Indian Institute of Sustainability (IIS). He said it will cover its various aspects like rural management, environment management, innovation, Agri-entrepreneurship, Agribusiness and Value Chain Management.

Acharya Devvrat, a great votary of natural farming endorsed the idea of an integrated approach to promote Agri-tech Start-ups to make farming easy and more profitable

Acharya Devvrat supported the proposal of Dr Jitendra Singh for an integrated approach to promote Agritech Start-ups to make farming easy and more profitable by pooling the resources and experiences of the Indian Council of Agricultural Research (ICAR), Council of Scientific & Industrial Research (CSIR), and Department of Science and Technology at the Centre and other similar research bodies at Agricultural colleges and Universities.

Dr Jitendra Singh briefed the Gujarat Governor that a trend of Agri-tech Start-ups has come up in India in the last few years due to active encouragement provided by the Modi government to address the problems of Indian agriculture such as supply chain management, use of outdated equipment, improper infrastructure, and the inability of farmers to access a wider range of markets with ease.

He also pointed out that Prime Minister PM Modi launched 100 Made in India agricultural drones across the country in February this year, which carried out farm operations in unique simultaneous flights. The Minister said, many young entrepreneurs are now quitting their jobs in IT sectors and MNCs to establish their own StartUps in agriculture, dairy and other allied sectors with huge profit margins.

Dr Jitendra Singh also informed Acharya Devvrat that the Council of Scientific & Industrial Research (CSIR) became the architect of the “Purple Revolution” in India by introducing high-value essential oil-bearing lavender crop through its Jammu-based Laboratory, Indian Institute of Integrative Medicines (IIIM) for cultivation in districts Doda, Kishtwar, Rajouri, Ramban, Pulwama, etc. In a brief span of time, aroma/lavender cultivation has become a popular option in farming for agricultural Start-up and it is now being replicated in other hilly States with similar climatic conditions like Uttarakhand, Himachal Pradesh and in the North-Eastern States as a pilot project.

Dr Jitendra Singh informs the success of the Purple Revolution in J&K is now being replicated in other hilly States with similar climatic conditions like Uttarakhand, Himachal Pradesh and in the North-Eastern States as a pilot project

Dr Jitendra Singh said, Agritech Startups are providing innovative ideas and affordable solutions to a number of challenges faced all across the agricultural value chain and it has the potential to change the face of the Indian agriculture sector and eventually raise farmers’ incomes.

Dr Jitendra Singh strongly advocated the use of modern and new technology in the Agricultural sector and pointed out that countries like Israel, China and the US have transformed several agriculture practices in their country with the use of technology. He said, Startups are now providing solutions such as biogas plants, solar-powered cold storage, fencing and water pumping, weather prediction, spraying machines, seed drills and vertical farming, which is bound to increase farmers’ income.