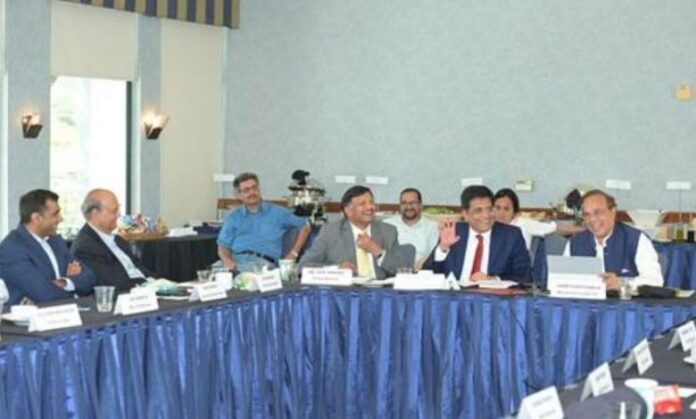 Bay area is very bullish about the potential that India and Indian businesses and startups have to offer: Shri Piyush Goyal

“Held an engaging interaction with venture capitalists in San Francisco Bay Area. Encouraged them for deeper engagements & greater partnerships with the vibrant Indian startup ecosystem”, the Minister tweeted about the meeting. He also encouraged them to consider mentorship of early-stage Indian startups to help them scale and succeed.

“As India continues to grow in the digital space, discussed ways to further expand cyber security in the country to ensure a safer and securer Digital India”, the Minister tweeted.

“As India ushers in Digital Techade, discussed how AI & machine learning is rapidly transforming the Software as a service (SaaS) market, accelerating India’s journey to becoming a 5 trillion economy”, the Minister tweeted.

The Minister had addressed the faculty and students of Stanford Graduate School of Business earlier in the day. He also attended an Indian community event hosted by the Consulate in association with TiE Silicon Valley, IIT Start-Ups and Indian Community Center.

Interacting with media later in the day, Shri Goyal said that Bay area is very bullish about the potential that India and Indian businesses and startups have to offer. They also see great potential in India’s huge market of 1.3 billion people, the Minister said.

He elaborated upon the several steps taken by the government to improve mentorships such as the Self Employment and Talent Utilization (SETU) scheme and such other transformational and upskilling initiatives. Under the aegis of the Startup Advisory Council, the focus is being placed on mentorship in tier 2 and 3 cities, the Minister added.

Responding to a query on semiconductor policy, Shri Piyush Goyal said that India had come up with a semiconductor policy many months ago, which offered very liberal incentives to companies to come and manufacture in India and set up plants. We already have a good ecosystem in design and several elements of the SC chain. We are in dialogue with many companies and several of them have shown keen interest in investing in India, he added. Shri Goyal assured us that India was very serious about promoting the domestic semiconductor industry.

In response to queries, Shri Goyal also highlighted the need for Indian products, especially those under the One District One Program (ODOP) initiative to be promoted all over the world. Enumerating our efforts to improve the packaging of ODOP products, the Minister said that institutions of eminence like the National Institute of Design (NID), the National Institute of Fashion Technology (NIFT) etc were being roped in to improve the look and feel of the packaging. He added that ODOP manufacturers were being onboarded on GeM free of cost and that government bodies, cooperatives etc. were being encouraged to use ODOP products, especially for purposes like gifting.

Speaking of the possible synergies between ODOP and Open Network for Digital Commerce (ONDC), Shri Goyal said that ONDC would democratize the buyer-seller ecosystem and would help expand the frontiers of ODOP. He added that efforts were being made to roll out ONDC in one or two cities soon and added that all efforts were being made to ensure that ONDC would be a good offering to the public.