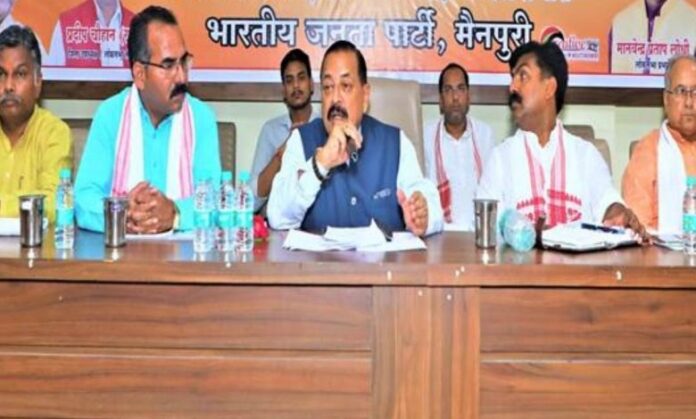 The Minister addresses back-to-back meetings with “Labharthis” and PRIs, DDCs, BDCs and Municipal Council Chairperson and Members at Mainpuri in Uttar Pradesh

Addressing back-to-back meetings with “Labharthis” (Beneficiaries) and PRIs, DDCs, BDCs and Municipal Council Chairperson and Members at Mainpuri in Uttar Pradesh, Dr Jitendra Singh said, each of the pro-poor and public welfare schemes was designed in such a manner so as to reach the neediest or the last man in the last queue, regardless of caste, creed, religion or any vote consideration. He said, this is fully in tune with Deen Dayal Upadhyaya’s philosophy of Antyodaya, which means the rise of the last person.

Dr Jitendra Singh said, when Modi took over in May 2014, almost half of the country’s population was deprived of facilities like toilets, housing, vaccination, electricity connection and bank accounts. He said, with Sabka Prayas, the Centre has been able to bring many schemes closer to 100% saturation during the last 8 years, there is a new resolve to make India a frontline state in the world in the next 25 years of Amrit Kaal.

Each of the pro-poor and public welfare schemes of the Modi Govt was designed in such a manner so as to reach the neediest or the last man in the last queue, regardless of caste, creed, religion or any vote consideration: Dr Jitendra Singh

Dr Jitendra Singh said the citizen-centric schemes like Pradhan Mantri Garib Kalyan Anna Yojana (PM-GKAY), PM Aawas Yojna, PM Kisan Samman Nidhi Yojana, Har Ghar Jal, Ujjawala, Sauchalaya, Jan Dhan, Ayushman have reached every such household without any political consideration and other considerations and utmost care was taken to target the needy and disadvantaged sections of society by following the principle of “Sabka Saath, Sabka Vikas, Sabka Vishwas and Sabka Prayas”. He said, people, are getting the benefits of welfare schemes without any discrimination, unlike in the past, when appeasement policy was rampant. The Minister emphasised that these welfare measures brought crores of people out of the clutches of abject poverty and gave them a life of dignity.

Describing the Panchayati Raj Institutions (PRIs) and their representatives as the essential messengers of Prime Minister Narendra Modi’s Welfare Schemes, Union Minister said that Panches, Sarpanches as well as the elected representatives in Block and District Councils have an opportunity to play a distinct role in reaching out to the last man in the last queue, at the grassroots level, and ensuring for providing him with the benefit of each of the pro-poor and welfare schemes introduced by Prime Minister Narendra Modi during the last 8 years.

Addressing the PRI representatives and local elected representatives, Dr Jitendra Singh said that they are the true messengers of Modi’s New India and asked them to ensure that not a single deserving citizen is left out from getting the benefit of schemes like PM Awas Yojna, Ujjwala, PM Garib Kalyan Yojna, Ayushman, PM Kisan Samman Nidhi, Swachhata and Clean drinking water. He told them to work in close coordination with the district administration to ensure that no one should be left behind in every scheme for the welfare of the poor.

Dr Jitendra Singh also asked elected representatives to work hard in the field to create awareness among the masses about the developmental works of the Modi Government during the last eight years and how it changed the national mood from despair to optimism. The Minister also emphasised that not a single charge of corruption was levelled against the Modi Government to date and Modi has succeeded in giving a transparent and delivery-oriented administration.